It’s hard to distill three weeks of traveling into one blog post. This road trip was a great entry into freelance life, but it’s crazy how fast it went. Living out of one suitcase became totally normal; staying in motion became instinctive. Every city had friends for me to see, things to do and places to go. I went into nearly every Barnes & Noble along my route to sign copies of my book.

Highlights of my trip include: Weathering a big storm during the Summit of Awesome in DC; seeing my great-aunt in Maryland; going to my good friend’s baby shower in NJ-suburban Philadelphia; hanging out with Mikey and Melissa in Philly; seeing PSY in Soho on the street; crashing with Karin and Ben in Bushwick; meeting up with Amy for drinks at Lavender Lake; stopping in Providence for an afternoon; lots of home cooking with Summer in Somerville, MA; doing research at the Corning Museum of Glass; going to the zine fair in Pittsburgh; getting Wendy’s for my grandma in Cleveland; seeing my buddy JT and his band Paper Route in Canton; and hanging out with my family back home. PHEW.

Big ups to Jessica and Michael for suggesting that I get an EZpass before going on the road — it saved me so much time on that East Coast corridor between DC and Boston. And I have to say that New York City driving was less terrible than I expected. I think driving in Pittsburgh prepared me for it pretty well.

These are the awesome handmade/craft shops I visited: 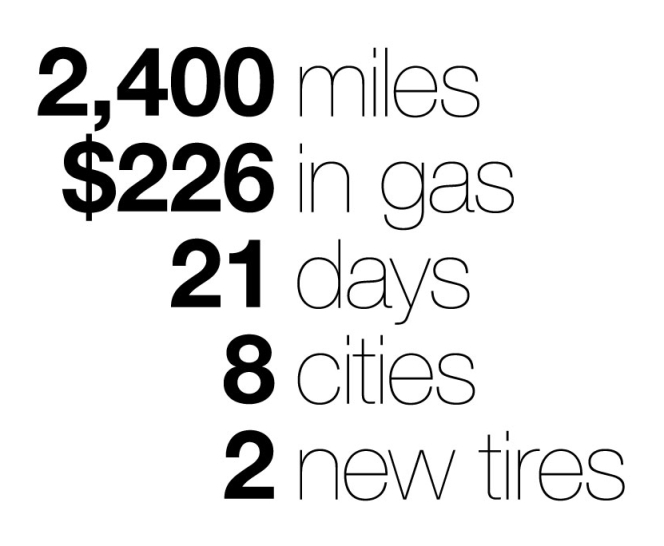