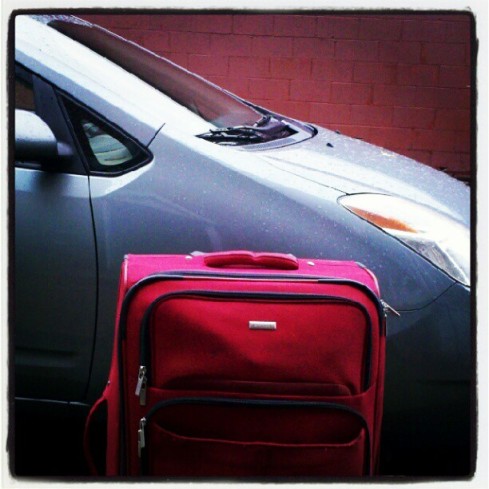 I keep meaning to post a full recap of my road trip, but it’s so hard to distill three weeks of living down to one blog post! I’m going to keep working on that, but in the meantime I thought I’d share what I learned about packing light for a long road trip.

Before the trip I googled stuff like “how to pack for a long trip” with little luck. The little good advice I found was for business travelers and always written for men. (Thanks for the suggestion of just taking one suit that I can wear during the day and out on the town, Internet.)

I started by making a list of all the things I thought I should bring on my three-week trip. I was travelling by car, but I was going to be in some big cities where I wouldn’t want to leave anything in it overnight. So restricting my stuff to one big suitcase was ideal. Then I edited down the list, on the advice of Mr. Glass, who knows a thing or two about travelling. And then I edited it down again as I was packing and running out of room.

One thing I didn’t account for in my packing was how much the temperature would change from early September in DC and New York (muggy and warm!) to upstate New York and Cleveland in mid- to late September (hella cold!). Whoops. But for a summertime trip I would’ve been good.

All that stuff fit into one big suitcase (a cheapo Target suitcase that is on its last legs), a messenger bag (for the computer), my handbag, and a totebag for the snacks and drinks. Half of my books I put into the bottom of my suitcase; the other half I mailed to myself at my roadtrip’s halfway point in Boston. Best idea ever.

Another thing I did and highly recommend was get a clear plastic storage cube to use as a divider in my suitcase. All my small items (socks, bras, toiletry bag, toothpaste, etc.) I put in there in the top, which kept them from getting lost in the bottom of my suitcase. And, of course, crashing with friends almost everywhere along the way meant I had the chance to do laundry.

I was seriously skeptical about my ability to live out of a suitcase for three weeks, but I got used to it really quickly. Makes me wonder what I’m doing with a closet full of stuff…

1 thought on “packing for a long trip: real talk”